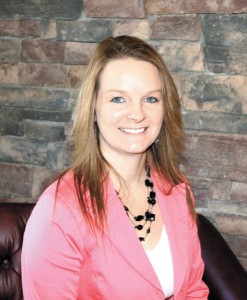 MILTON — When Milton Town Clerk Kristy Rogers was appointed to take over town manager duties a year ago, she didn’t do it for the recognition.

Her hard work has paid off, though, as she earned the title of Clerk of the Year Sept. 23 at the Delaware League of Local Governments’ annual meeting in Dover.

Prior to serving as the town clerk, a position she assumed at the departure of former Town Manager Win Abbott, Rogers worked as the town’s general accounting clerk. She holds a bachelor’s degree in accounting from Wilmington College, now Wilmington University.

Rogers wasn’t expecting the nomination, and she said her heart began to race when she heard her name called during the award announcements. Rogers is one of 41 members of the Delaware Municipal Clerks Association, which represents about 30 Delaware municipalities.

Rogers started working for the Town of Milton in 2011 and said some of her favorite parts of her job are the learning process of her new position and the chance to help Milton residents.

“I love the public service aspect, being able to help the residents, and working with all of the employees and different departments to see things through to the end,” she said. “It’s a great community, a lovely small town, and it’s great to see how things are changing, I think, for the better.”

“From what I understand … there’s been a lot of upheaval in the administration in the Town of Milton and throughout all of this, even though she was fairly new as a town clerk, she took on their responsibility as well as her own and continued to run the town smoothly,” Haddick said. “She’s very good and very accurate at what she does.”

Despite the challenges, Rogers said she loves being involved with Milton’s inner workings.

“Every day is different,” she said. “I love working for Milton, with the mayor and council for the citizens and all the staff; it’s very important.”